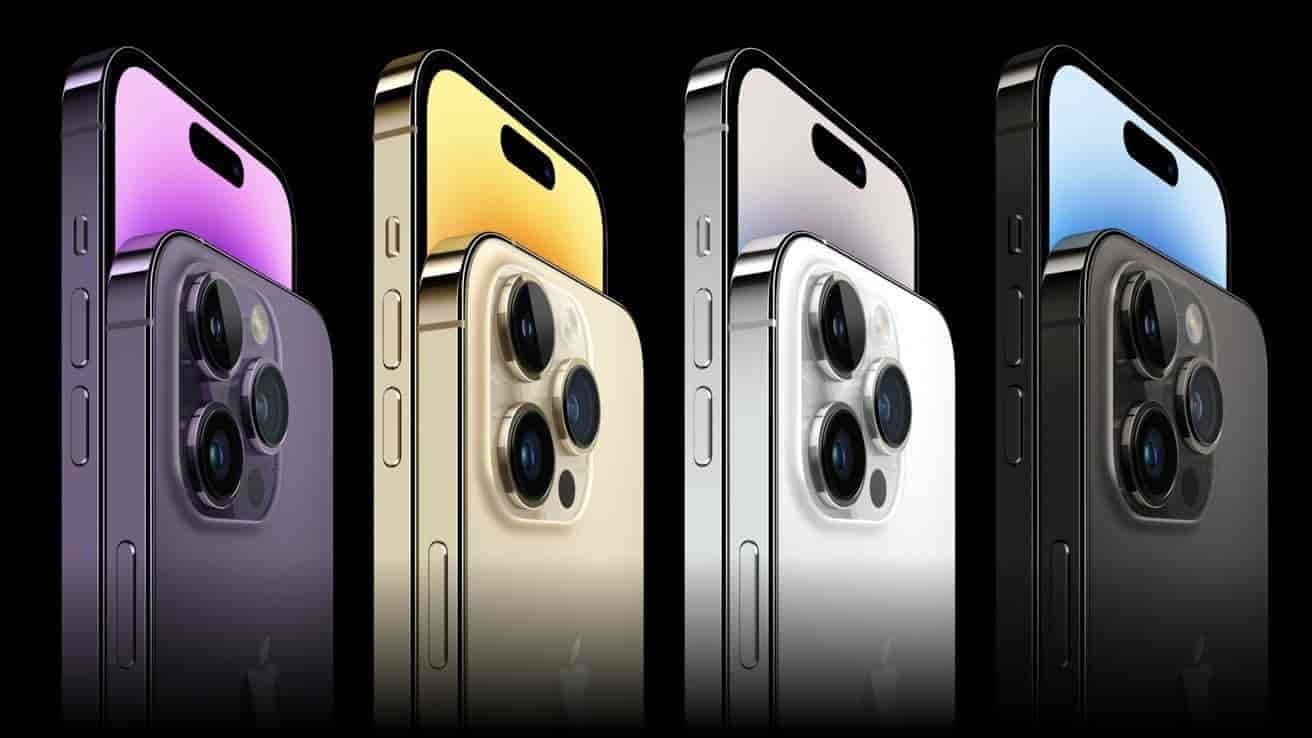 On 07.09.2022 it became clear that iPhone 14 will be available in four models: iPhone 14, Plus, Pro, and Pro Max. They are divided into two sizes, with the smaller ones having a 6.1-inch display and the larger ones having a 6.7-inch display. The other visible differences are in the colors and cameras. The more budget series comes with two cameras and the classic notch on the display. The professional flagship models have an optimized notch, sleeker matte colors, an additional third camera on the back, and steel chassis. The most significant advantage is that the Pro models are equipped with the new main camera, which is 48 megapixels, and the new Apple A16 Bionic processor, while the other two budget models have 12 MP cameras and an improved version of the last year's A15 processor. The company focused this year mainly on more durable batteries, better cameras and night photography, an Always-On display, and many other styling and customization options in the operating system. They have also emphasized safety, as Apple has added satellite SMS sending in case of emergency (Emergency SOS via satellite) and sensors that automatically report if you have suffered a road accident (Crash Detection) and inform your loved ones. With the new phone, we also get the new updates in the iOS 16 operating system, which is now also available in the long-awaited Bulgarian language. Phones made and intended for the States will not have a physical SIM card and will only use the electronic counterpart eSIM. In comparison, those made for the European market will be able to use Dual Sim technology: one physical nano SIM card and one electronic one. 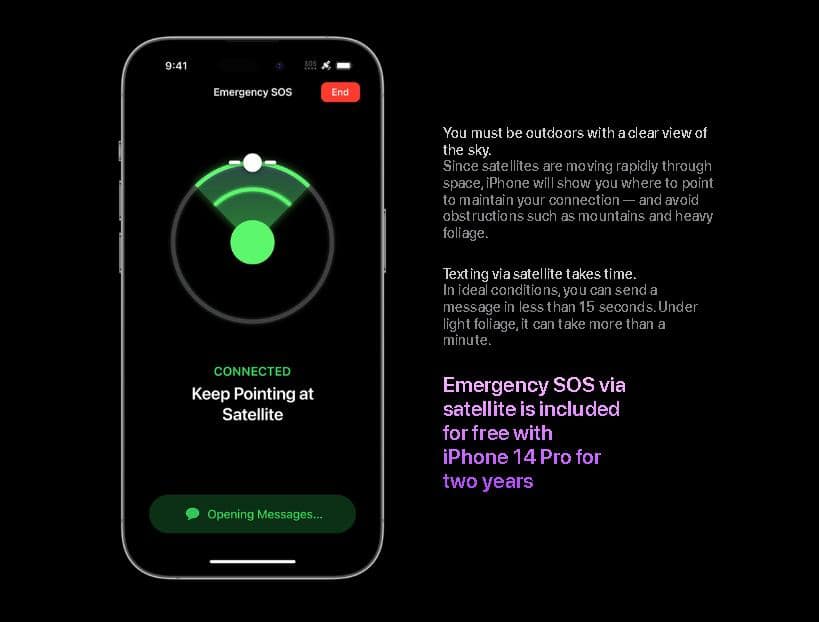 (photo of Emergency SOS via satellite in action)

Flagships retain their elegant design of moldings with steel frames. The display has an improved aspect ratio and pixels per inch are more than before thanks to the optimized notch. The two higher-end models come in two sizes, with the Pro being 6.1-inch with dimensions of 147.5 x 71.5 x 7.9mm and weighing 206 grams, and the Max being 6.7-inch with 240 grams of weight and dimensions from 160.7 by 77.6 by 7.9 millimeters. Visually, the two phones differ only in their sizes.

The two models of the higher series have a completely new design of the display, with the notch in the middle optimized, compared to the previous models. The company has used the notch to its advantage and created Dynamic Island technology, which shows your apps in the background of the notch.

Both models come with a 120hz refresh rate screen and have LTPO Super Retina XDR OLED panel technology and an oleophobic anti-fingerprint coating. The smaller version has a smaller 6.1-inch display and 2556 x 1179 resolution, while its larger counterpart, the iPhone 14 Max, has a 6.7-inch panel and 2796 by 1290 resolution. Both sizes offer 460 pixels per inch (PPI) and have ceramic nano-coating for better durability. Another innovation for both professional models is the Always-On Display technology, which means that the screen can always work, even when the phone is locked. So you can keep track of the time, notifications, fitness activities, and many other things. The Always-On display will be able to be styled entirely according to the user's taste. It has an improved version of the ProMotion technology, which reduces the display to a 1Hz refresh rate and thus preserves the battery capacity for a longer time.

Flagships come with the all-new six-core Apple A16 Bionic processor, which has 2 fast and 4 economical cores. The processor has 4 nm technology and is much more economical than its predecessors. The new better processor has a 16-core Neural Engine that can do 17 trillion operations per second. Thus, each capture is analyzed pixel by pixel in order to optimize the photos as efficiently as possible. In the budget models 14 and 14 Plus, the processor is an improved version of last year's A15 Bionic, and what is new about it is that the GPU has one more core for better graphics operations. 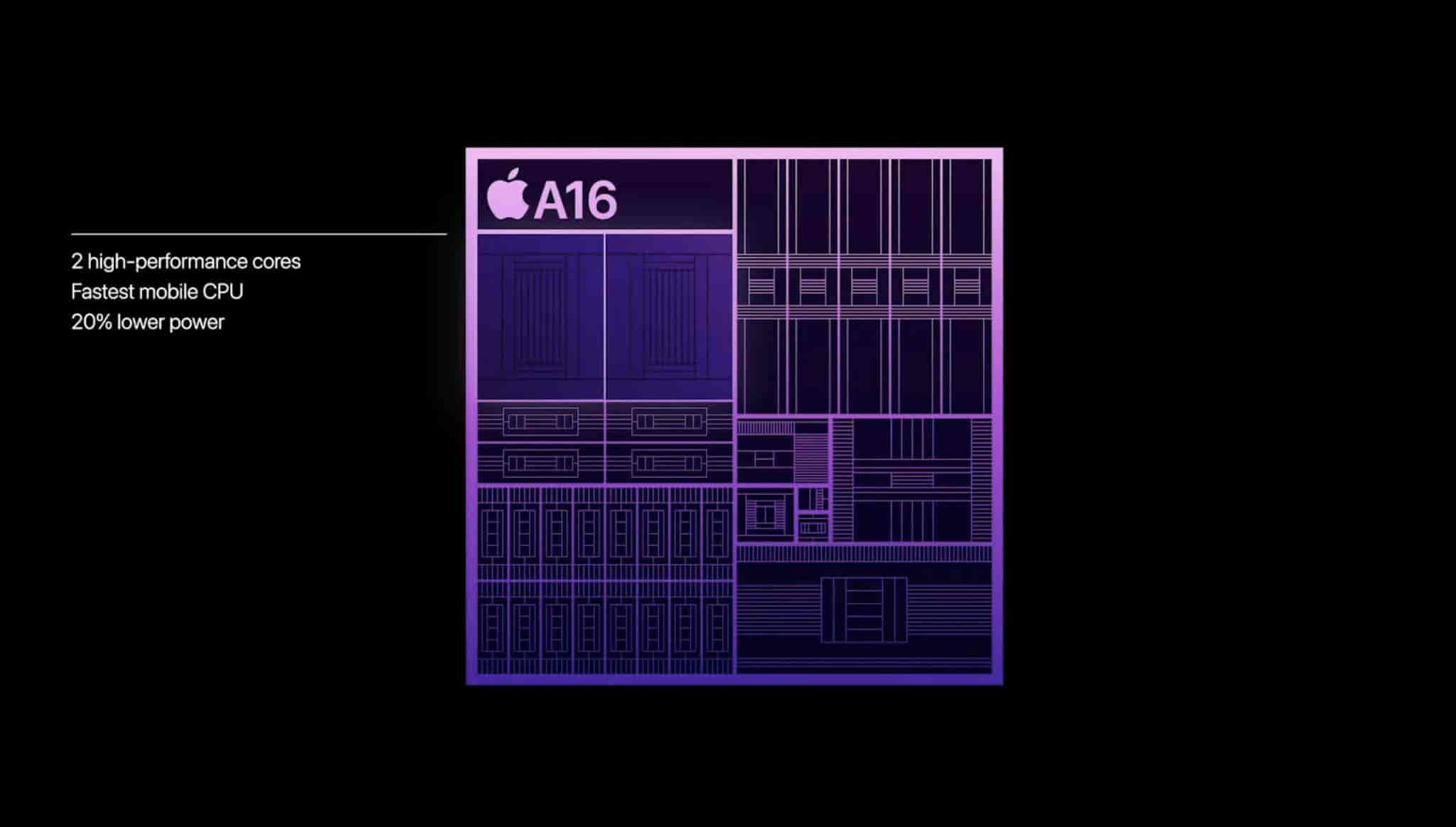 (visualization of the Apple A16 Bionic integrated circuit)

The professional models feature the latest 48MP main camera with a quad-pixel sensor and second-generation sensor-shift optical stabilization. This sensor is 65% larger than that of the iPhone 13 Pro.

The other two rear cameras are an improved 12MP telephoto and a 12MP ultrawide. All cameras have enlarged sensors and are almost twice as good at shooting in low light or at night. In the two Pro models, we again find the TOF 3D Lidar sensor, which scans all objects in its range and improves the details of the objects in the photos. The front camera has a 12-megapixel wide sensor and improved autofocus. Again we have the presence of Face ID on the display for more convenient unlocking of the device.

(rear cameras of professional models and their characteristics)

With wireless connectivity, we have some new benefits, such as satellite connection when there is no signal and when you need help. The other new thing is that the Bluetooth standard has gone from version 5.0 to 5.3, making it faster and more economical compared to previous models. Wireless home connectivity remains the latest generation WiFi 6. NFC is also available on the four new models, allowing contactless payments via Apple Pay. All four phones support the 5G mobile network, which is 100 times faster than its 4G predecessor.

The batteries of all models are even more durable than ever. According to Apple, the two flagship smartphones can last all day. Under load, the Pro can last up to 23 hours of videos, and the iPhone 14 Pro Max up to 29 hours. All phones in the new series support MagSafe wireless charging, as well as Quick Charge with a 20W adapter. The company claims that phones can be charged with this adapter up to 50% charge within 30 minutes.

The operating system has many novelties this year:

- New “Dynamic Island” system for notification and monitoring of applications running in the background;

- Lock screen styling, such as choosing your own font, adding dates or texts, option to scroll through selected albums, and more;

- Ability to edit iMessages between two iPhones. It will also show if a message has been edited and when; 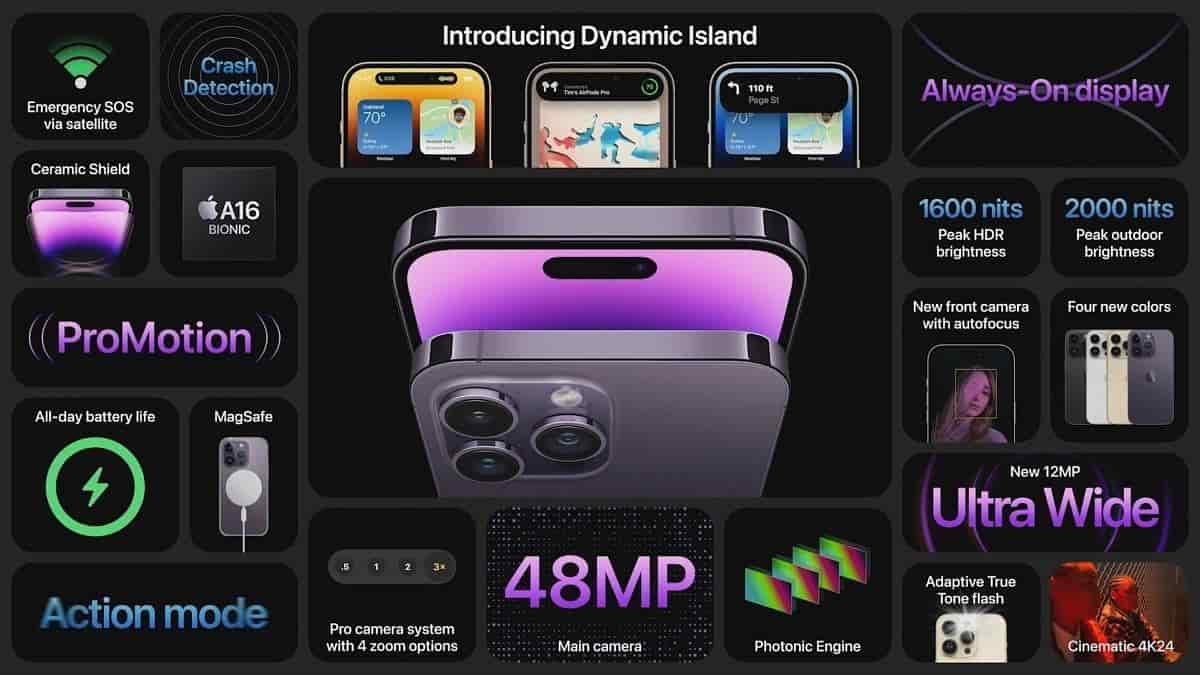 (photo of a partial set of characteristics of the flagship models)

This year, the gap between the budget and professional models is much larger compared to last year's premiere. The cheaper models use an improved version of last year's A15 processor and have 2GB more RAM than the previous generation. The cameras are again 12 MP but improved. They also got Cinematic Mode, which until now was only available on Pro models. Compared to the previous models, there is no particular difference in price, but this time the difference between the more affordable and more elite models is noticeable. Many users complain that there is no smaller Mini model this year. At the moment, it is not clear why the company abandoned this model. The higher series of phones received an all-new better Apple A16 processor, a display with much higher brightness, Always-On technology, a new notch on the display with a tailored “Dynamic Island” notification system, improved photo quality when shooting in the dark, improved video stabilization, and an all-new 48-megapixel main camera sensor.