Traditionally, the month of September is dedicated to the presentation of a new portion of Apple's smart devices. 2021 was no exception and the company from the state of California surprised us with four new smartphones: iPhone 13, iPhone 13 mini, iPhone 13 Pro and iPhone 13 Pro Max. One of the most awaited models, due to its expectedly lower price compared to the Pro models, it was iPhone 13. In the following lines, we will take a closer look at its main parameters.

Although the design of the iPhone 13 does not differ much from its predecessor, there are still a few changes that are worth mentioning. The first thing we notice is the so-called notch, at the 13 it is a little shorter, but at the same time a little wider. This, in turn, contributes to a larger field of view on the screen, which remains unchanged in size (6.1 inches). The second element that can be noted is the size, the iPhone 13 weighs 174g. and measures 146.7 x 71.5 x 7.7 mm. The third visible change is in the cameras, on the iPhone 13 they are located diagonally. Although there are no major differences with the previous model, they are still there, which means that they do not have compatible accessories.

The iPhone 13 has a 6.1-inch Super Retina XDR OLED display with a resolution of 2532 x 1170 pixels and a brightness of up to 1200 nits. This is especially noticeable when we use our phone in the sun. With the iPhone 13, the information on the screen will be significantly better.

Predictably, one of its strongest points is productivity. The improved 6-core Apple A15 Bionic (5 nm) shows an enviable speed even with a higher load. And the speed split into 2 cores with a speed of 3.23 GHz and 4 cores with a speed of 1.82 GHz contributes both to faster work at more heavy games and programs, as well as to preserve battery life for a longer period of time. 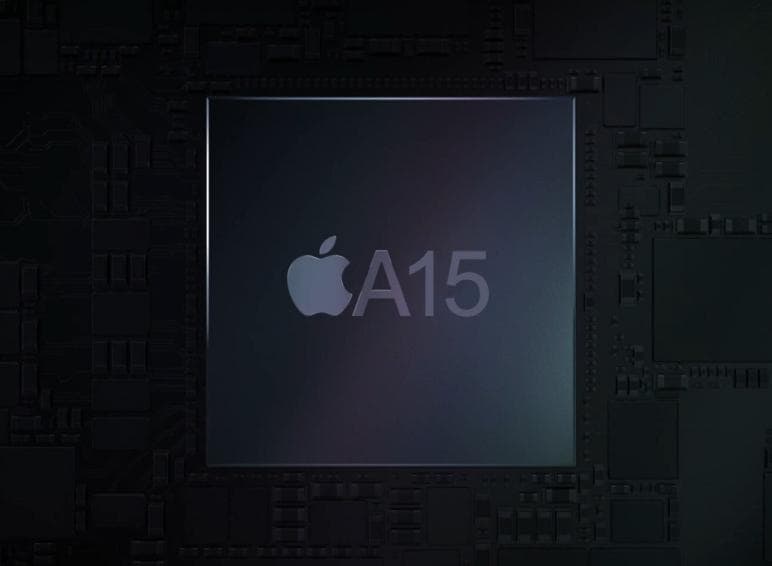 (picture of the A15 Bionic processor)

At the presentation of the iPhone 13, we noticed that there was no version with 64GB of memory for storing information. The smallest possible memory with which you can get the model is 128GB, and for people who like to take more videos and photos, there are 256GB and 512GB.

The iPhone 13 has a dual primary camera that consists of two 12-megapixels. One is ultra-wide and has an advanced f/2.4 aperture for higher-quality photos in low light, and the other is wide and has an improved f/1.6 aperture that allows as much as 47% more light to the sensor. Video stabilization videos has also been improved thanks to the sensor-shift technology, which is much more efficient than the previously used technologies. In addition to the usual for Apple phones, portrait and night mode, the iPhone 13 has also added a cinematic mode, which would please lovers of video recording with high quality. This function allows moving the focus from one object to another with just one touch of the display. To these improvements we can also add the option to capture video content in 4K resolution at 60 frames per second. The front or so-called selfie camera is also 12 megapixels. With its help, Face ID also works to unlock the phone. Night mode for selfies, snapshot mode, as well as cinematic mode are just some of its functions. And with the help of 5G connectivity, we can also make calls with a higher resolution via FaceTime.

The autonomous operation of the iPhone 13 has been improved thanks to the larger battery capacity (3240 mAh) as well as the more efficient A15 Bionic chip. The phone supports quick charge and you can charge up to 50% in 30 minutes with a 20W power adapter. The phone again arrives without a charger, but only with a charging cable. This is because of the company's policy to reduce the harmful emissions that are caused during the manufacture of the adapters.

The ‌iPhone 13 and iPhone 13 mini‌ are available in six colors, four of which are new shades:

(photo of all iPhone 13 colors)

The iPhone 13 is expected to receive the long-awaited Bulgarian menu after the new improved version of Apple's operating system - iOS 16 is released.

Restore.bg online store has many years of experience in the trade of demonstration and second-hand iPhone phones. In it you can find new and old Apple models, at much more affordable prices. The equipment comes with a warranty and a no-down payment option. If it does not meet your expectations, you can easily return your online order within 14 days. Quality electronics don't have to be expensive, make sure of that by visiting Restore.bg