When does it come out

The month of September is approaching and like every year, Apple users have high expectations from the company for their new range of phones, laptops, tablets, watches, and innovations. According to unofficial data, this year the premiere of the iPhone 14 will end on September 7, 2022. This data has not been confirmed by the company, but it is certain that for the last 10 years this tradition has not been broken and phones are almost always announced in September.

According to reliable sources, analysts and leaks, we know that it is very likely that one or all of the ones shot below will be included in Apple's new smartphones. Most of the information has not been confirmed by the company. Here are some of the things we know or assume about the new iPhone 14 lineup:

The new series will again include four models, as in the thirteenth series. These models will be iPhone 14, 14 Max, 14 Pro, and 14 Pro Max. According to leaked data, this series will not have a small Mini model and the smallest ones will have a 6.1-inch display.

Expect possible changes in the color ranges of the new models:

(photo of color ranges for iPhone 14 and Max)

The iPhone 14 and Max are expected to have a glossy back like the current budget models and come in these colors: Black, White, Blue, Red, and Purple. 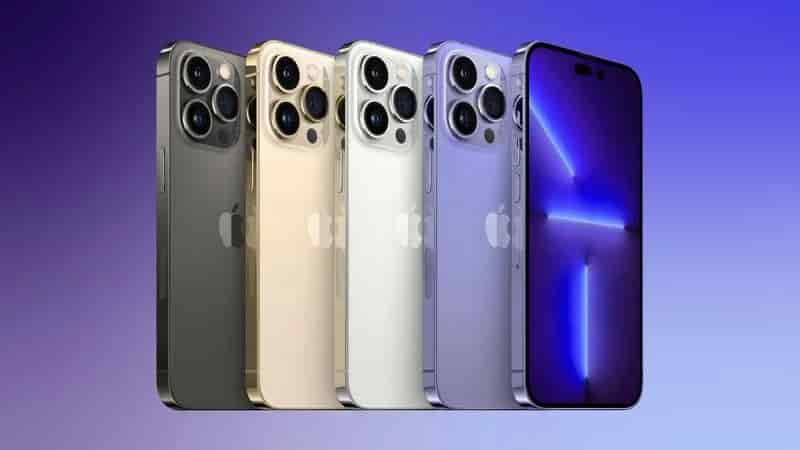 The flagship 14 Pro and Pro Max models are expected to have a matte back panel and come in these colors: Graphite, Gold, Silver, and Purple.

The classic notch in these series will be removed or will be even more optimized compared to the previous series. According to the leaked information, there will be a drastic redesign of the Face ID technology and other modules in the notch to reduce its size and achieve more display coverage. The panels will come in two sizes: 6.1-inch for the iPhone 14 and Pro, and the larger 6.7-inch for the Max and Pro Max models. It is possible that in this series, all phones will have a 120 Hz display refresh. Another display news is that you can get the Always On Display option.

According to the famous Chinese analyst in this series, we will get an improved front camera, and the presence of a 48-megapixel sensor in the rear cameras of the Pro and Pro Max is possible. The company has been betting on 12-megapixel rear cameras until recently, but it is possible that these sensors have reached their limit. The main advantage of larger megapixels is that photos are recorded at a higher resolution, but this does not always guarantee better quality. The fact is that Apple is famous for the great photos from their phones, and until now their phones have not exceeded 12 MP. At 14 and only Max emerges, to have two cameras with twelve megapixels.

According to leaked data, the new models, or just one of them, may stick with last year's thirteenth-series Apple A15 Bionic processor, which is still very good compared to its competition. Other sources say that all the new models will get the new Apple A16 processor. Other suggestions indicate that the budget models 14 and 14 Max will get 6GB of RAM memory, unlike the previous 13 series (there were 4 gigabytes each). At the expense of more ram, the speed might be a touch slower than this Pro and Pro Max model.

The smallest storage option is expected to be 128GB on budget models and 256GB on flagships. The internal memory of some of the models can reach up to 512GB

According to many analysts, it is possible that in this or a selected series, the physical SIM card will be removed, and the phones will remain only with an electronic SIM card (eSIM). This would improve the water-resistance of the phones and give the company more room for new innovations.

All of the new 14-series phones are expected to feature facial recognition and there won't be a new fingerprint unlock model this year.

With the new models, we will get the new improved operating system iOS 16. It is expected to include:

These and many other improvements will be included in the new operating system. Stay tuned for more information when iPhone 14 and iOS 16 are officially released.

Where can I buy an iPhone

Restore.bg is an online store with many years of experience in the trade of new, second-hand, and demonstration equipment. In it, you will find demo Apple iPhone mobile phones at very affordable prices. All items have been thoroughly tested for performance. The equipment comes with a long warranty period and the option of payment without a down payment. Quality electronics don't have to be expensive, make sure of that by visiting Restore.bg.