On September 7, 2022, the premiere of the new range of products from Apple took place. It included new watch models, headphones, and four new Apple iPhone 14 models. From the premiere, it became clear that the four phones will come in two sizes and there will be no iPhone 14 Mini in this series. The company has improved the cameras of all models to take better pictures in the dark. They also added:

- Emergency SOS mode to call for help via satellite connection when you are out of range, automatic reporting sensors.

- Automatic understanding of a road accident (Crash Detection). In the event that you are involved in a traffic accident, the phone automatically contacts the authorities and your loved ones to inform them of your location.

- Huge battery improvement. With the iPhone 14, it lasts up to 20 hours of watching videos.

Compared to last year, we again get two sizes in the more budget iPhone series, but this time the second size is larger. The standard iPhone 14 model gets the same 6.1-inch size as its thirteenth predecessor. Compared to last year's series, we again get a second budget model, but this time bigger. The iPhone 14 Plus is the new model that has a larger 6.7-inch display and a larger battery capacity. In the previous series, the second model was the Mini, with a 5.4-inch display, but this year the company is betting on larger sizes and batteries. The smaller smartphone measures 146.7 x 71.5 x 7.8 millimeters and weighs 172 grams. The larger phone measures 160.8 x 78.1 x 7.8 millimeters and weighs 203 grams.

(visual rendering of iPhone 14 and larger Plus)

iPhone 14 and 14 Plus, will be available in five beautiful color shades:

The phones have a ceramic shield on the display which makes it even more durable. In terms of technology and display size, the new budget models have no difference with their predecessor, the iPhone 13. Model fourteen has a 6.1-inch panel that is Super Retina XDR OLED and has a brightness of up to 1200 nits. Its resolution is 1170 by 2532 pixels. The larger Plus has the same OLED panel, but with a size of 6.7 inches and a resolution of 1284 by 2778 pixels. 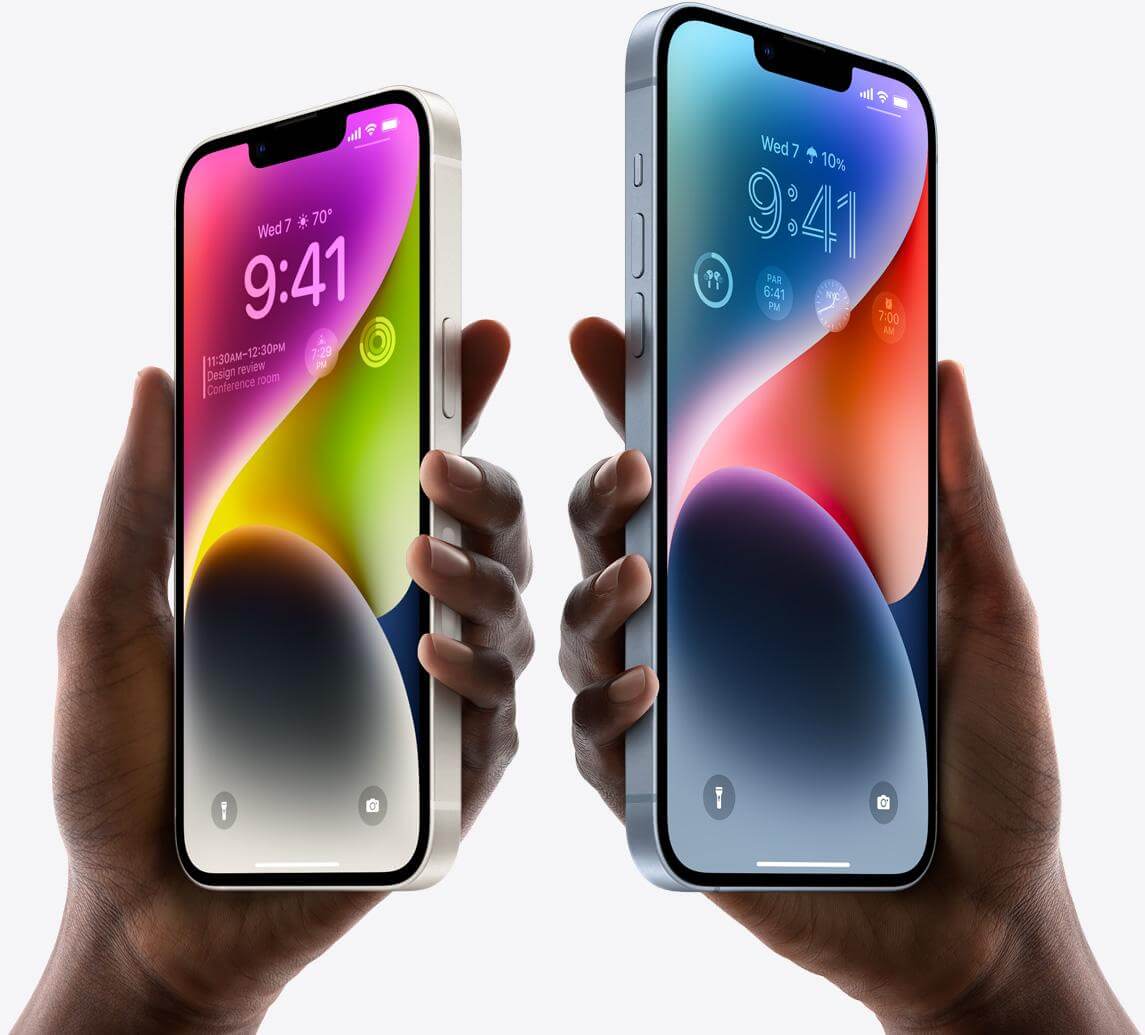 The Apple A15 Bionic processor showed very good performance last year, and that's why the company decided to bet on it again this year. iPhone 14 and Plus will have an improved version of the A15 Bionic chip. The difference in this version of the chipset is in the internal structure of the processor, it is much more thermally efficient. It heats up less and more slowly and also the built-in video processor has been upgraded from quad-core to 5-core. This is reflected in even faster loading of games and videos. In the more professional Pro and Pro Max series, we have the new Apple A16 Bionic embedded. 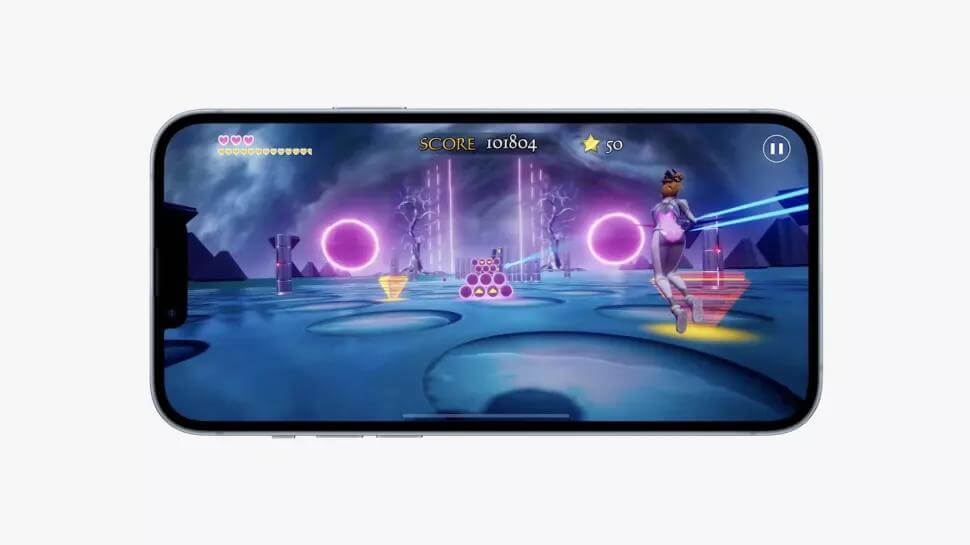 The new budget model and its larger counterpart are available with 128GB, 256GB and 512GB of internal memory. The RAM memory of both budget models is 4GB.

The iPhone 14 and Plus have improved rear camera sensors compared to previous models last year. The main difference is that they have a larger aperture for more light and improved shooting of all cameras in darker environments, including the front camera. The two rear cameras are 12 megapixels, one is wide and the other is ultrawide. The front camera has improved autofocus.

Last year's budget models didn't have this mode and many users were disappointed that they couldn't try it because it was only available in the professional Pro versions. Now cinematic mode is also available in the cheaper models. All phones of the new series can use this mode and shoot dynamic videos with the option of many changes after shooting them. For example, after shooting a video, you can change the focus from one subject to another.

This year we got a very innovative feature for Apple and that is Emergency SOS via satellite. It can send your coordinates via SMS in case of emergency, disaster or lack of mobile signal. Until now, it is not clear whether the function will work in Bulgaria, but it became clear that it will be free for the first 2 years of the release of the model. The Bluetooth standard is also newer. We have moved from version 5.0 to 5.3. The new version is more energy-saving, has a more secure connection with other devices, and the quality of data exchange is also improved. There are no changes regarding the WiFi, it is again 802.11 a/b/g/n/ac/6 and supports a connection with two frequencies (Dual Band). Another wireless extra will be contactless payment using the Apple Pay application, it will again be available in these models, and you will be able to send money via messages using Apple Cash.

All models support up to two SIM cards, such as European ones will support one physical and one electronic (eSIM) card. And the handsets destined for the states will support two electronic SIM cards and will not have a physical card option. All of them support the fast 5G mobile network, which is 100 times faster than the previous 4G network. At the moment, the faster 5G network is available in most of Bulgaria's major regional cities, but this will improve over time.

We do not yet have exact data on the batteries of the new models, but according to data from Apple, the iPhone 14 will be able to last up to 20 hours of video viewing. While the larger Plus counterpart will last up to 26 hours of video viewing. When listening to audio recordings or music: the duration reaches up to 80 hours for the small model and up to 100 hours for the large model. Both budget models support charging up to 50% in 30 minutes in the presence of a 20W adapter for fast charging, which this year will also be sold separately and will not be in the phone box. Another standard extra for the models is wireless charging, which can also be done using MagSafe. 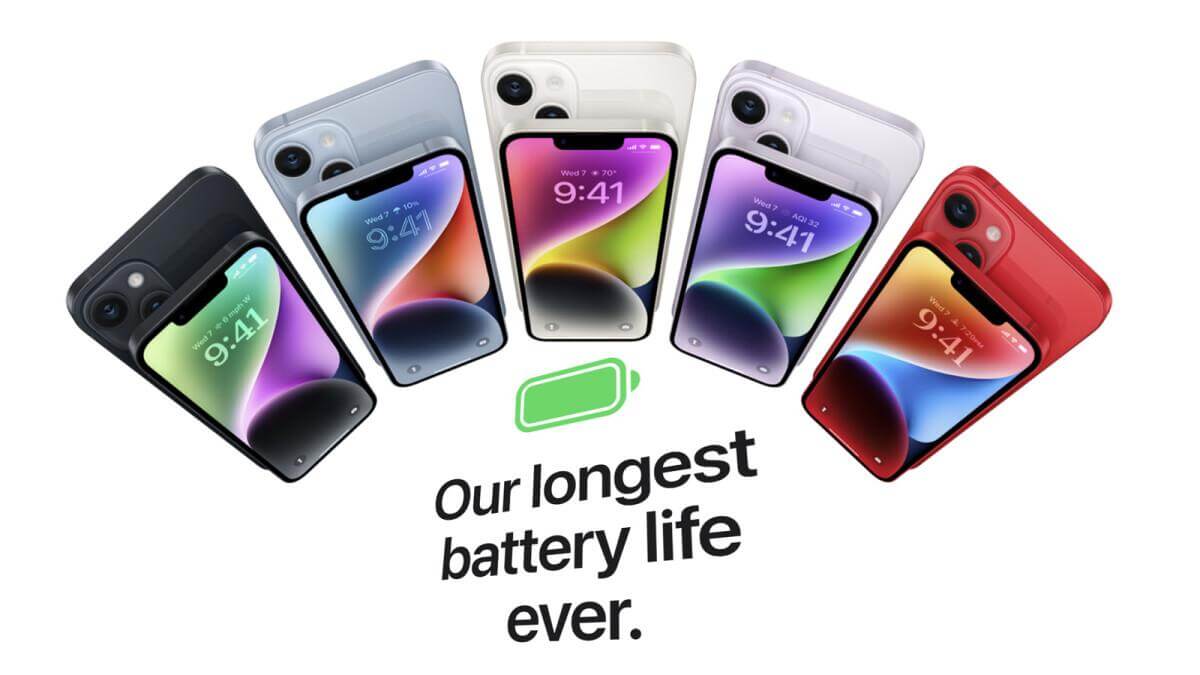 We see many improvements in the iOS operating system:

- seeing the percentage of battery charge;

- styling the lock screen, such as selecting an entire album to scroll through photos or changing the font;

- styling of notifications and their display;

- Improvements in tagging people in photos and albums;

(photo of the iPhone 14 Pro and Pro Max display notch)

Apple has apparently worked a lot on the optimization of its operating system because with each new model the endurance hours are extended several times. Also visibly, the batteries they build into their smartphones have more capacity than before. However, it cost them the lack of a smaller model this year. The other thing the company has tried to do is improve its legendary cameras as much as possible. This year we have an improvement in absolutely all cameras. We have almost two times better shooting in the dark and improved autofocus on the front cameras. The long-criticized notch on the display is still there this year but optimized. In the more professional Pro and Pro Max models, it is even smaller and in the form of a pill.

Where to buy an iPhone

Restore.bg is an online store with many years of experience in the trade of new, second-hand, and demonstration equipment. In it, you will find demo Apple iPhone mobile phones at very affordable prices. All items have been thoroughly tested for performance. The equipment comes with a long warranty period and the option of payment without a down payment. Quality electronics don't have to be expensive, make sure of that by visiting Restore.bg.